An increase in the number of supporters of the policy of the Head of State and the Nur Otan party among young people.

The history of our Youth wing is closely related to the activities of the Nur Otan party. Until 2008, the Youth Wing participated in the implementation of projects under the leadership of the party. By this time, the organization did not have an independent legal entity.

On January 17, 2008, an expanded meeting of the Political Council of the Nur Otan Party was held. Exactly here President Nursultan Nazarbayev proposed to hold a congress of the Youth Wing. The first congress of “Zhas Otan” was planned for late spring.

On May 14 of the same year, the 1st Congress of the Zhas Otan Youth Wing was held in Astana. In his speech at the congress, the President set a number of priority tasks for the organization. The head of state called for creating all the necessary conditions under which every young citizen of Kazakhstan could realize his potential, become a self-sufficient and competitive person. He also defined the role of “Zhas Otan” in the implementation of state youth policy.

Prior to the First Congress of Zhas Otan, on the initiative of the Nur Otan party, parliamentary hearings were held to discuss the youth’s main legal document – the Law on State Youth Policy in the Republic of Kazakhstan. Youth conferences were held in all regions of the country, at which a list of 310 delegates to the congress was determined. The congress was attended by representatives of youth organizations of Kazakhstan, members of the party and bureau of the Political Council, heads of state bodies, deputies of the Parliament of the Republic of Kazakhstan, representatives of the Government, the Assembly of the People of Kazakhstan, the media, NGOs, as well as young guests from foreign countries. The congress delegates approved the charter, as well as the strategy of actions for 2008-2011, according to which the activities of the Youth Wing were carried out. After being elected at this congress in 2008-2012, Nurlan Uteshev was the Executive Secretary of MK Zhas Otan.

November 16, 2012 is another important date for us, on this day the II Congress of MK “Zhas Otan” was held under the motto: “Dream. Work. Believe”.

At the congress, there were accepted the “Zhastar – Otan!” Strategy until 2020, designed to bring the country’s youth policy to a new level.

The draft strategy of the Youth wing was discussed in all regions of the country with representatives of youth organizations, students, working youth, athletes, and cultural figures. The strategy has 11 main areas of activity, among which – quality education, labor as a basic factor in the social adaptation of youth, cultural development and unity, the development of youth entrepreneurship, the development of science, the volunteer movement and others.

More than 9 thousand delegates attended the congress. Participated in the event and guests from other countries.

The most anticipated was, of course, the speech of the Leader of the nation N.A. Nazarbayev. 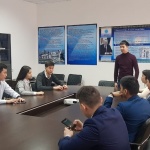